Leveraging social media in a crisis

Bumble and Tinder are at war. In addition to competing for customers and market position, the two are firing accusations at each other—with Tinder actually filing a lawsuit against Bumble, claiming violation of two of its patents. Bumble accuses Tinder of trying to buy it, intimidate it, and copy it—and now of filing an unfounded lawsuit.  Moreover, Bumble has fired back with a brilliant social media salvo. This article doesn’t take a position on what’s true or false; nor are we taking sides. We are, however, analyzing Bumble’s brilliant social media handling of the crisis involving a competitor lawsuit.
Bumble and Tinder are each online dating services—in this respect, a subset of the overall social media industry. Each is mobile based, with users swiping left to reject a possible dating match and swiping right to indicate interest. If the swiped-right person also swipes right, it’s a match. The two interested parties are notified, and then have the opportunity to connect, first via chat and then in person, if they want to. Tinder is the behemoth of mobile dating apps, acquired by IAC/Match Group, the corporation that owns match.com and other such services. Tinder has been around longer, has many more users (reported at 50 million in 190 countries, plus users on other Match Group services; 20 billion matches to date and 1.6 billion swipes/day*). Bumble positions itself in this context as the entrepreneurial upstart, claiming 30 million users (other stats: 850 million matches, 48 million swipes/day*). Bumble was founded by two former employees of Tinder on the basis that they are women creating a service that is more supportive of women, with a safer, better place for all. It has a unique twist called “ladies first”: The woman in the match has to initiate the conversation; if she doesn’t, there is no further contact.
*Data Sources: Bumble number of users: Bumble per their March 20, 2018 email. Tinder number of countries: Match Group web site. All other Tinder & Bumble stats: DMR Business Statistics.

Traditionally, crisis management was a PR matter, with best practice being to avoid, contain, control, remove—just make it go away. But in social media, such traditional approaches are not viable and likely to backfire. On the Internet you can’t make a crisis go away; it will just keep popping up like a whack-a-mole game. As counter intuitive as it may seem, best practice is to acknowledge and embrace the crisis. Even let yourself get beaten up on your own pages. Then seek to diffuse, manage, and—in the best cases—flip the crisis to your advantage. After all, most brands want attention—although not usually via a crisis. But as long as you’ve got it, see if you can make good use of it.
But before a crisis happens or you even have the slightest inkling of one, the first best practice step is to establish a social cultural presence in which you build loyal brand defenders who come to your aid when needed. The first rule here is “You don’t make friends in the middle of a crisis.” But if you make friends ahead of time, building loyalty and relationships, when the crisis comes those people will rise as your brand defenders.
Having set that context in advance, when a crisis does come, first identify who’s involved in it and who you care about. On that basis, decide what to do.
Is this a loyal enthusiastic customer who is disappointed with something and complaining? This can be good trouble because she’s loyal. She may appear to be your opponent, but is actually a loyalist you should listen to and meet part way.
Is this a general complaint by a generic customer? Again, this is someone to constructively win over.
Or is this a competitor attack? Here you are not going to win the attacker over, by definition. Rather, you need to be concerned about the impact of the crisis itself and your approach to it on your customers and influencers.
Or is this an organized activist? It’s also unlikely you’ll win them over; but this is tricky. Whether the activists are justified or not, some or many of your customers and influencers may identify with their cause. You want to win over your customers and influencers, but have to be extra careful to not antagonize them.
Generally our framework defines four levels of crisis ranging from mild (DEFCON 4) to extreme (DEFCON 1). While most crises are in the middle of the range, most brands under- or overreact, treating them as mild or major.
Let’s take a look at Bumble’s counterattack when Tinder sued it, exemplified by this email Bumble sent to its users on March 21, 2018, and posted online.

We’ll never be yours. No matter the price tag, we’ll never compromise our values.

We — a woman-founded, women-led company — aren’t scared of aggressive corporate culture. That’s what we call bullying, and we swipe left on bullies. Ask the thousands of users we’ve blocked from our platform for bad behavior.

In fact, that behavior? It only fuels us. It motivates us to push our mission further — to work harder each day to build a platform, community, and brand that promotes kindness, respect, and equality. That’s the thing about us. We’re more than a feature where women make the first move. Empowerment is in our DNA. You can’t copy that.

So when you announced recently, in another attempt to intimidate us, that you were going to try to replicate our core, women-first offering and plug it in to Tinder, we applauded you for the attempt to make that subsidiary safer.

We strive every day to protect our nearly 30 million users, and to engineer a more accountable environment. Instead of swinging back and forth between trying to \ buy us, copy us,, and sue us  why don’t you spend that time taking care of bad behavior on your platforms?

We remain focused on improving our users’ experience, and taking our mission worldwide, until every woman knows she has the power to make the first move, to go after what she wants, and to say “no” without fear.

We as a company will always swipe right for empowered moves and left on attempts to disempower us. We encourage every user to do the same. As one of our mottos goes, “bee kind or leave.”

We wish you the best, but  consider yourselves blocked.

Here’s what Bumble has done here step by step, or perhaps better put, swipe by swipe:

Best Practice #1: Establish a cultural context and make friends before the crisis happens.

First, well before this happened, Bumble built a brand presence based on a cultural sensibility and context. Their dating product’s core premise is a nice environment in which women drive the interaction and thus can avoid and prevent unwanted advances and harassment. Men who participate are effectively buying into that premise (and by the way, most just love the notion that the start the conversation burden is for once not on them). But it goes beyond that core feature to the brand’s overall positioning, voice, vocabulary, design, and enforcement of standards. Many even suspect some algorithmic magic that, more often than other apps, first presents you with dating opportunities most likely to interest you. A short review of Bumble’s social presence shows a constant celebration and engagement of positive experiences and safe environments. This experience builds engaged, loyal users.
An example of their anti-bullying social presence using similar metaphors 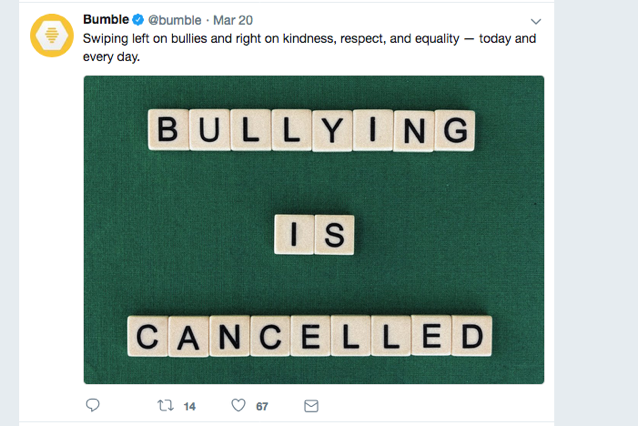 And then the headline post version of their email.

Best Practice #2: Identify who the crisis involves and who you care about.

Clearly this crisis involves a competitor that Bumble most likely won’t win over. But Bumble certainly wants to win the approval of its customers and influencers. In this case, the opposition, while extreme, is not an activist or a cause; so the risk of alienating customers by taking on the attacker is lower, depending on how you come across when you do it. Bumble clearly went for a frontal assault on Tinder, but did it in a way that aligns with their brand positioning, customer loyalty. They called to their customers and influencers to stand for good versus evil with a clever approach that garnered significant media attention for its side of the story.

Rather than minimize attention to the issue, Bumble has promoted it with emails to its users (and other venues). Not only that, but they recast it in dating service vocabulary set against their own cultural context: “We swipe left on Tinder.”
The immediate core issue is a lawsuit by Tinder against Bumble. Bumble diffuses that by blurring it with Tinder’s overall attack on them (per Bumble, Tinder trying to buy, intimidate, copy, and now sue them). Tinder is cast as the bully on the online world, representing everything that Bumble and its users stand against. By resetting the context to this greater battle, Bumble actually diffuses the attention on the legal issue. I’m not suggesting Bumble is avoiding the legal part—just they are diluting it as the main event, and instead raising it to a broader and more important concern for customers and influencers.

And then, in what I can only call masterful, they flip the entire matter back on Tinder.  First using the swipe left metaphor, which—in dating app land—is the act of rejecting a presented dating prospect. Second, by elevating the battle to the entire difference between the two companies, as Bumble sees it. Bumble presents itself as the positive, safe environment for its members. To them, Tinder is a negative, unsafe environment in which women can be harassed—just as Tinder is now harassing Bumble and its women co-founders. Bumble appears the innovator, the quintessential entrepreneurial company. Tinder is positioned as an arm of a big bad corporation that doesn’t like losing the business battle, so resorts to bad tactics. Bumble is cast as good, a brand you want to swipe right on. Tinder is cast as evil, the brand you swipe left on.
This is a great flip. Bumble has taken a serious business/legal problem (regardless of which side is right) and recast it in the minds of users and influencers as a battle between good and evil that reflects the values of the respective companies. At this point, the more Tinder battles Bumble, the worse a bully Tinder seems.
Implications for brands.  Bumble’s handling of the legal threat and its greater battle with Tinder is just a super example of crisis management best practices in the social media age—well done and a lesson for all brands. Handled with social media savvy instead of traditional PR command and control methods, even a crisis is an opportunity to express your brand values and win customers and influencers.
To learn more about how marketing pros handle social media crises, read chapter 8 – Turning the Social Minefield into Opportunity in Peter Friedman’s The CMO’s Social Media Handbook.
Credentials & Disclosures: I have been a user of each service and others—not only for analysis, but for dating. I am familiar with their features and relative market positioning as reference for this analysis. As an early pioneer in social media and head of a leading social media software and services firm, I have overseen social crisis management dozens of times for some of the largest brands in the world. Our company, LiveWorld, has developed and deployed a strategic and operational framework for social crisis management. Neither Bumble or Tinder are or have been clients of LiveWorld, nor were they involved or asked for comment on this post. We did not perform a full social audit on either brand—just enough of a review to support the content of this article.